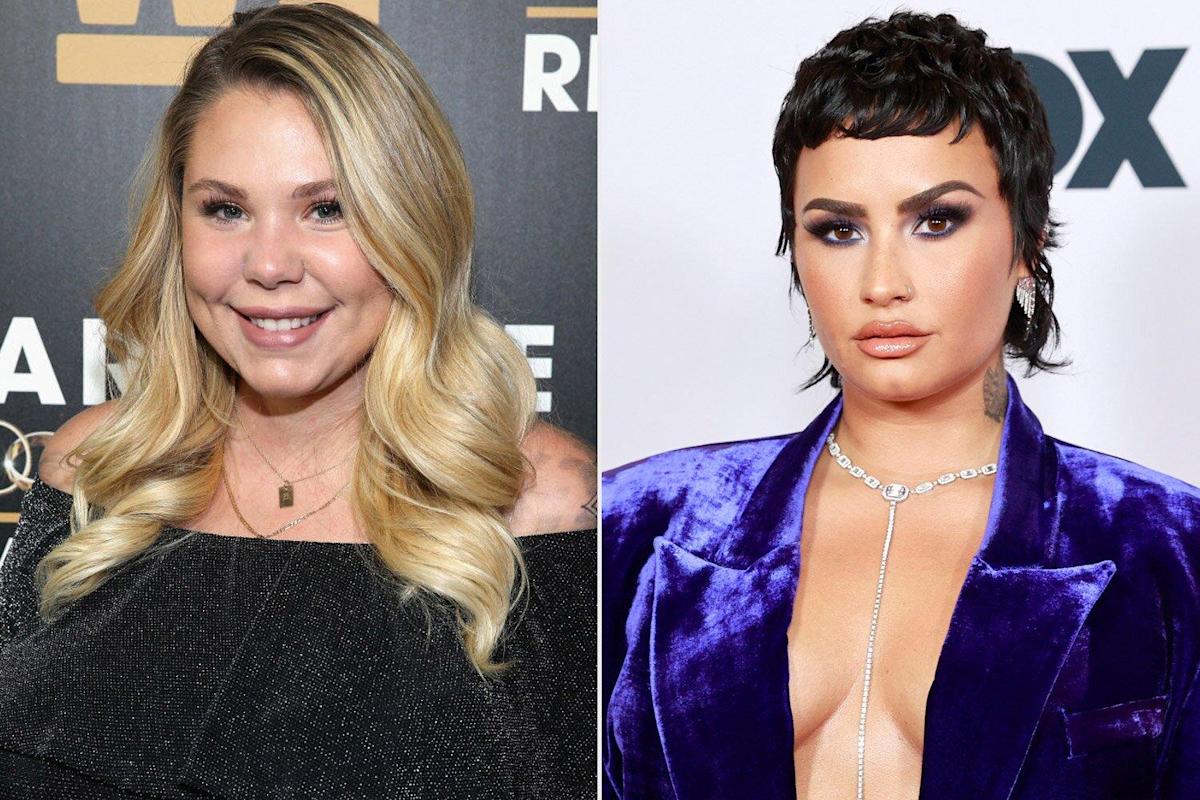 Demetria Devonne Lovato, the American singer is often in highlights for her unidentified gender, and thus people many times underestimate terming her with the right gender tags. Hence, Kailyn Lowry, the feisty cum tattooed beauty has made her apologizes and accepted her mistakes of calling her with the wrong gender pronouns.
On Thursday, the teen Mom 2 star also apologized to the singer via her Instagram story. She wrote that Lowry will be moving ahead to do it better, after the star appeared for the podcast, ‘Coffee Convos,’ and mistakenly misgendered the singer, 29.
Further, explaining, Kailyn said, “So, I just came on here to apologize and say, moving forward, I want to do better. I want to respect people and what their pronouns are and truly just ask people, moving forward.”
The star also requested Demi to stay patient because she wanted to get things on the right track and also Lowry feels that all must know the proper use of the pronouns. Notably, Lowry also used “she/her” pronouns to label Lovato instead of Demi’s preferred pronouns “they/them.”
A few days back, Lowry also claimed that she had to tell her ex Chris Lopez to properly use the gender pronouns. She said, “I think it was yesterday or the day before, I got on here to correct Chris on my pronouns. My pronouns are ‘she’ and ‘her.'”

In July, Demi Lovato via her Instagram wrote, “I felt the need to post this because I often find that the change in pronouns can be confusing for some, and difficult to remember for others. It’s all about your intention. It’s important to me that you try, but if you make a mistake, it’s okay 😊🙏🏼💞”

Later, relating all this, Lowry said, “He constantly calls me ‘they.’ Knowing that that’s done to me, I caught myself referring to Demi Lovato in today’s episode as ‘her’ and ‘she’ when her [sic] pronoun is ‘they.'”

Demi Lovato also revealed that she is truly capable to rely on herself and needs nobody to help, support, and authenticate her. Hence, they claimed, “I was able to stand on my own two feet without needing someone else to validate me or to make me feel accepted.”

The singer in an interview with ‘The 19th’ and detailed her experiences on how she discovered truth within them. They also claimed how this outbreak of pandemic has become so beneficial for the singer in making her move ahead and also about their split with their ex-fiancee.
Further, Lovato also explained, “I was able to stand on my own two feet without needing someone else to validate me or to make me feel accepted. And when I said goodbye to that relationship, I also said goodbye to everything that was holding me back from being my most authentic self.”
In 2020, Demi Lovato also stated that they began to discover themselves as non-binary human being, soon after the pandemic started. However, the singer moved ahead into a relationship with Max, and hence all this led Demi to neglect these minute things about themselves.
The singer added and clarified, “I met someone and I got into this straight relationship, and that was great, but that led me to ignore all the parts of myself that I didn’t think were digestible for my partner at the time, who ended up becoming my fiancé.”
Demi and Max dated one another for nearly seven months and soon they parted separated in September. Later, in May, Demi also revealed that they are non-binary human being and hence she within some time modified their pronouns to they/them.
The singer added and also claimed that she believes in their gender’s journey to last forever. Demi thus said, “There might be a time where I identify as trans. I don’t know what this looks like for me. There might be a time where I identify as non-binary and gender-nonconforming my entire life.”
They later said, “Or maybe there’s a period when I get older that I identify as a woman, I don’t know what that looks like, but for me, at this moment right now, this is how I identify.”
The singer in continuation said that this will never make them go back one way or another. That time, Demi claimed, “And I have a feeling that it’s not going to ever go back to one way or the other, but it’s about keeping it open and free and just I’m a very fluid person, and so that goes with how I express myself as well.”
In July, via their Instagram profile, Demi wrote a short note and introduced that how few of the new pronouns can be difficult to be remembered.
The singer had also stated that they have been many people who mainly try to out up their efforts in correcting their genders. However, Demi many times simply termed this as the ‘accidentally misgender.’
Demi stated, “If you misgender me, that’s okay. I accidentally misgender myself sometimes! It’s a huge transition to change the pronouns I’ve used for myself my entire life. And it’s difficult to remember sometimes!”
They also clarified, “As long as you keep trying to respect my truth, and as long as I remember my truth, the shift will come naturally. I’m just grateful for your effort in trying to remember what means so much to my healing process.”
Significantly, in June, Demi was spotted with Noah Cyrus, and they both were holding their hands together and this let their relationship rumors spark in the media. Demi and Cyrus were both snapped at Six Flags, after some months, and later their love rumors just grabbed the highlights.
Thus, amidst the dating rumors and hangouts of the singers, an Insider mentioned, “They’re very close and have been hanging out.” Another source clarified that their rumors are ‘weird’ and they both are just good friends and stated, They have dinner sometimes, but they’re not romantic. They got together for this song that sorta came together a bit last minute, and they hang out.”
In 2021, while in a YouTube Pride event, both of the singers, Demi and Noah in collaboration performed and they were joined by the Trans Chorus of Los Angeles for their performance.
, Demi Lovato shared a picture with Noah of their event and wrote, “Thank you @noahcyrus for closing out the night w me for @youtube’s pride 2021 celebration I’m so happy we finally got to sing our song together #Easy,” and expressed her gratitude to her.