The Feat Of The Mutant Hospital 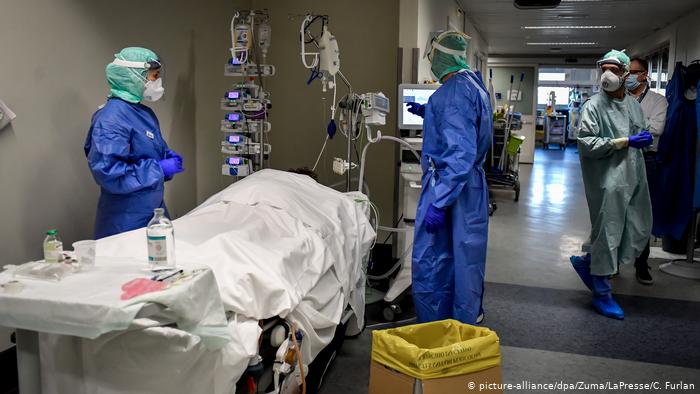 The Ramón y Cajal University Hospital does not exist. It is no longer that 17-story mass that incessantly devoured and spat gentlemen in pajamas with noisy groups – ah, the family! -; toilets with the taste of croissant in their mouths dodging the din of taxis, cars and buses that emptied out before the main entrance, or fragile silhouettes of the arm of others heading to the consultations – nervous – or back from them – calm, it has gone Well-

The giant had been like this for 43 years, leaning out on a highway in the north of Madrid, with his scientific aristocracy—It is a reference center in 14 medical units— sharing the old-fashioned terrazzo corridors with the sick and their families. A small city of 5,468 employees, 775 beds in the plant and 67 in critics, with its kingdoms of highly specialized knowledge that fought with elbows for the always scarce resources .
That hospital vanished a year ago.
On March 13, 2020, the 60 doors of the center were closed. The unknown coronavirus isolated the sick in their septic solitude and sent the infected but mild toilets home en masse. The most serious were admitted. The medical director, Agustín Utrilla, a veteran vascular surgeon, told the heads of service: “Forget about your plant. The hospital is divided as of today into dirty and clean. Point”.

This is how Macrocovid began, the mutant invention of Ramón y Cajal conceived in a meeting room between the medical chiefs and the management that demolished human walls: multidisciplinary teams of doctors were assembled under the orders of experts in infectious diseases, internal medicine, pulmonology or geriatrics .

“I have seen surgeons who believe themselves demigods obeying 30-year-old pulmonologists,” says a surgical specialist. The competition between the scalpel and the stethoscope – “we don’t even remember which side to take,” he jokes – was diluted. The hierarchy was also diluted, many say. Solidarity outside the stripes and categories won. If the doctor had to act as an assistant or an orderly, he would.

Maxillofacial surgeon Patricia de Leyva was lectured by a colleague about Zoom. Then he went to war with a two-day mask and re-sterilized disposable surgical gowns that were pure wrinkle. He saw weak patients die, alone, immune to the medication. I was crying. “When I was going to discharge a patient, my voice would break,” he recalls, “and I would run away.”

The psychiatrist Carmen Loeck used the phonendoscope again under the orders first of a pulmonologist and then of a geriatrician. They commissioned him, of course, to call the families. “Take care of him,” they told me, “don’t let him die.”

Those were the days of silence in a crowded hospital. From the fear of being infected by infecting their own. Of the insomnia that the auxiliary nursing techniques tried to alleviate in a WhatsApp group. To get together to cry in the locker room. And of the images that remain.

That of Sergio Montero, a newly hired nurse who had not been in a critical care unit for years, was this: “My first two patients shared a box in the ICU. One of them was obese, he had all the ballots to die. But no, that day the comrade died ”. That of Teresa Urdiales, an emergency attendant: “People were leaving from one moment to the next.

You went out and the relatives asked you. And you couldn’t say anything ”. That of Carmen, auxiliary, who did not think. She only acted: “In the midst of the chaos and contradictory orders, you would take off your PPE [personal protective equipment] scared to death in case you had caught it.”

But they were also the days when all the sick received handwritten colored notes pasted on the yogurt at dinner: “Strong. You’re the best. Can”. “After the storm the sun always comes out.” Antonia Muriel, kitchen manager coordinator, had a friend with an admitted uncle and asked her to contact him.

“I told him I could send you a note on the tray. Then I discussed it with my colleagues. The next day a guy brought 100 phrases of encouragement that he had written with his wife and that’s how we started ”.

In that confined spring, Carmen saw her four-year-old grandson applaud many miles away. “By my abu!”. Then – she cries when she remembers it, always cries when she talks about the first wave – a friend of her mother, 85 years old, flooded her phone with messages of affection and support.

“And while,” he sobs, “people of 70 were dying.” The psychologist Patricia Fernández called 40 families of patients a day to help them face the very hard blow of being away. “In the end my head was spinning,” he recalls. “And then you think you don’t know how, but the work went ahead.”

One of those families was that of José Manuel Diego, a 54-year-old commercial subject to life by a respirator. While he was sleeping, his wife passed away. Also his mother-in-law. “When he woke up,” says Daniel, Juan Manuel’s son, “his life had collapsed.

And you had to tell him. They did it in the hospital and Patricia accompanied us ”. Today the father, with his fatigue, his five months in rehabilitation, still dejected, has been able to return to work.

Macrocovid grew as citizens arrived drowning in the emergency room, occupying everything – up to 104 armchairs were installed in addition to the beds. The operating rooms, where almost 1,500 operations had been performed in January, became ICUs. In the five rooms that remained, only emergencies were operated. On March 18 the beds of critics were doubled.

Rehabilitation gyms were transformed overnight into intermediate care units, a kind of bridge between the room and the ICU. Knowledge flowed fast by email and WhatsApp.

“I marveled at how everyone brought out their best, including the wise,in his accelerated career to learn more, ”says Jaime Masjuán, the head of neurology, director of Macrocovid. Research projects were doubled. They did the first autopsies in Madrid. And the first massive serology: they found that one in four employees had been infected.

“The worst was when we no longer had beds: I mean the furniture,” says Masjuán. “ A hotel gave us theirs. The single rooms became doubles and the doubles, triples. They hadn’t existed for 10 years ”.

These drastic changes occurred in other hospitals: “We have always considered ourselves bureaucratic structures, slow in adaptation processes and, nevertheless, this pandemic has forced us to restructure both processes and equipment … and it has been done in a very agile way” , explains Patricia Alonso, physician at the Clinic and member of the board of directors of the Spanish Society of Health Directors (Sedisa).

Juan Antonio Marqués, director of the Reina Sofía hospital in Murcia, also in Sedisa, points out: “What seemed impossible in normal times, has been so now, it is true that with a colossal effort by many professionals.”

The blackest night
March 31st. There are 1,003 covid patients admitted. The maximum. 103 in the ICU. And 21 deceased. Children and psychiatric patients have been sent to other hospitals. Director Utrilla is at home, alone. He doesn’t stop coughing. Contact the UME: “I asked them to come and take out the coffins. There was no room in the mortuaries ”. The corpses stayed in the rooms for hours.

But they did not collapse.In part, Masjuán says, because they were getting ahead in preparing new spaces to receive the sick – they even equipped the waiting rooms for the consultations with oxygen intakes, which they did not occupy – and because on weekends the hospital worked at full throttle , with more doctors. They were discharged with great agility.

“There was never a lack of material, no beds, or personnel,” recalls the deputy director of nursing Beatriz Martín, in charge of the critics, who juggled to avoid the casualties of her infected companions and combine teams of different skill levels. The stark irruption of the first wave, in which the toilets had to become the only company for the men and women fighting for their lives, humanized the hospital, he says.

“The prism has changed us. He taught us to have more respect for the patient and to value the family more. To give importance to their privacy, to take care of things such as light or noise to which they are subjected in places like the ICU ”.

The onslaught returns
Macrocovid is resurrected in August, when the second wave is in sight. Like an accordion, it expands and contracts, until now. When she returns from vacation, Carmen, the assistant, spends a whole day crying: “She kept saying to myself: ‘I can’t go back there, I can’t.’ But then you go, because it’s your profession, ”he says.

The psychologist Patricia Fernández and the psychiatrist Carmen Loeck attend to health workers. Nurses and assistants, especially. “They suffered from nightmares, flashbacks and intrusive images. From your patients. From their faces. From when they left the room for a moment and found them dead ”, recalls the first. Pure and hard post-traumatic stress, the result of the first attack.

Downcast, listless women, feeling guilty for believing that they have not been able to give the best care That they lose their vocation. The psychiatrist remembers it like this: “They arrived with anxiety and insomnia, their spirits dull, repeating, ‘I’m not interested in anything, I don’t enjoy anything, what people do, what the authorities do, makes me angry.”

After the summer the clinical sessions are resumed. But they are blended. “I miss that of being 50 doctors stuck in a room, talking. Science was bullish, ”says internist Mónica López. “It is a hindrance for the residents who are training,” he adds. With the passing of the months, of the waves, the doctors get frustrated at each new growth of the covid.

“We have a feeling of hopelessness, that we stop seeing the patients who need us,” says the neurologist Masjuán. “And ours have suffered more cognitive deterioration, they are the great victims.”

In December, the hospital is closed again to relatives because they infect their bedridden relatives. But the nurses alert the kitchen if a patient has a birthday. They send him an omelette with a tomato cut into a rose shape. And the congratulation written in chocolate.

On Christmas Eve, the tablets connect the patient with their own. But they all cry. The orderly, the assistant, the nurse and the doctor. At home, Carmen, the assistant technician, bursts into tears when she sees the table set for herself. He has lost 14 kilos. He decides to ask for help to try to undo the knot that has parasitized his chest.