The Krill Paradox is more than previous thoughts of researchers 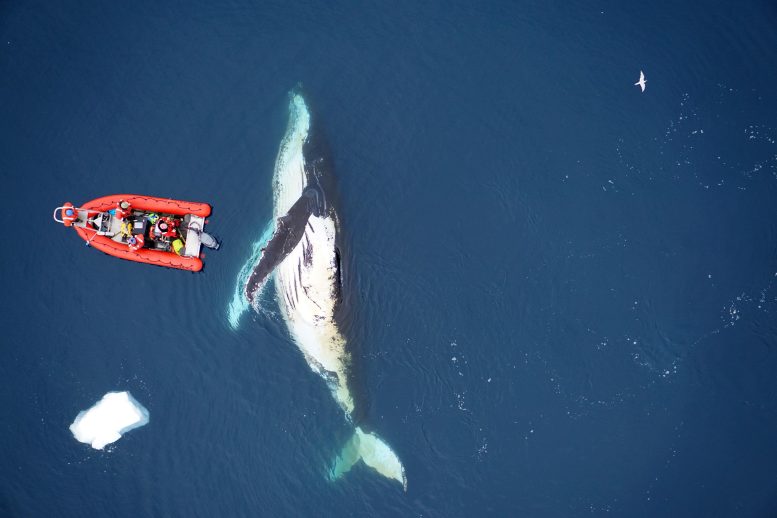 Whale feeding research demonstrates how the dramatic fall of big marine mammals has harmed the health and productivity of ocean ecosystems.

Humans killed an estimated 1.5 million baleen whales in the icy waters that encircled Antarctica between 1910 and 1970. They were hunted for their fat, baleen, and the filtering fringe they had in place of teeth, as well as their flesh. One may think that this would be a good thing for krill, the small shrimp-like animals that whales eat. However, a fresh study released on November 3, 2021, reveals that the loss of baleen whales in the Southern Ocean has resulted in a decline of krill.

According to the researchers, this surprising conclusion demonstrates how much the precipitous loss of big marine animals has significantly impacted the health and productivity of ocean ecosystems.

Because large whales cannot be researched in captivity, they are naturally challenging to study. Earlier estimates of whale intake were primarily based on either research on dead whales or metabolic extrapolations based on much smaller animals.

The researchers studied blue, fin, humpback, and minke whales, which all consume by gulping a significant volume of water and filtering it through their mouths’ fringed baleen plates until just their meal remained.

They used multiple high-tech tagging devices that attach to whales for five to twenty hours, capturing their motions, acceleration, sound, and, if light permits, video. The Duke Marine Robotics and Remote Sensing Laboratory employed drones to assess the length of individual, tagged whales, allowing researchers to quantify the volume of their gulp. The researchers used an underwater device called an echo sounder, which Savoca compares to a fancy fish finder because it uses sound waves at different frequencies to determine how much prey is present. They collaborated with NOAA’s Environmental Research Division and the University of California, Santa Cruz.

Data analysis found that whales in the Southern Ocean consume around twice as much krill as previously estimated and that krill-feeding blue and humpback whales off the coast of California consume two to three times as much as previously assumed. Fish-feeding humpback whales, on the other hand, may consume the previously predicted quantity or even less. This variation appears to reflect the food’s energy density, whales need to consume more krill to receive the same amount of energy as they would from a lesser amount of fish.

The researchers estimated intake using data from the tags that collected prey density, gulp size, and lunge frequency. To get from hours of data to broad estimates and then apply those to whales all across the world, meticulous calculations were necessary.

The researchers concluded that the abundance of krill in the Southern Ocean in the early twentieth century required to be around five times what it is now to feed the pre-whaling whale population. This means that whales play a complicated role in their ecosystems, with population decline and recovery significantly linked to total ecosystem production and functioning.

Due to an abundance of small algae known as phytoplankton, the Southern Ocean is one of the most productive ecosystems in the world. Phytoplankton is an important food supply for krill, tiny fish, and crustaceans, which are eaten by bigger creatures such as whales, birds, and other fish. However, whales also contribute to the survival of phytoplankton. Whales defecate after eating krill, releasing iron trapped within the krill back into the ocean, making that iron available to phytoplankton, which requires it to survive.

These findings’ numerous twists and turns highlight the potential significance of asking basic questions. This investigation has placed doubt on what people thought whales required to survive, as well as how whale and human activities influence ocean ecosystems.