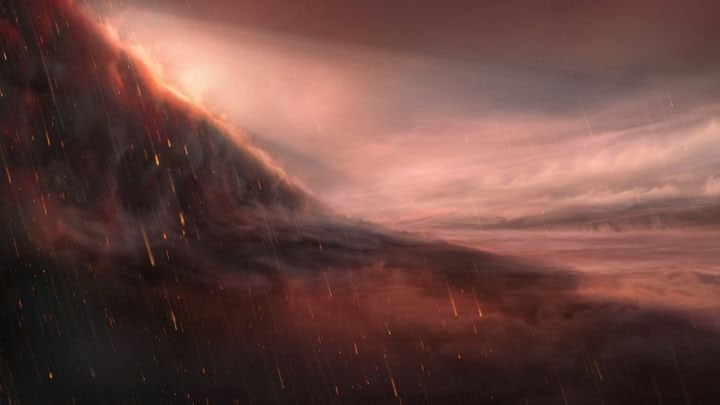 ExoA Jupiter-like exoplanet, where iron vaporizes, condenses during the night and then rains from the sky. The WASP-76b exoplanet may be much hotter than scientists previously thought.

A multinational team led by scientists from Cornell University, the University of Toronto, and Queen’s University Belfast said they had found traces of ionized calcium on the planet, which shows that the planet is a lot hotter than the previous assumptions.

The finding was found using high-resolution pictures that were captured from Gemini North at Mauna Kea’s summit in Hawaii.

Hot Jupiters are named so because of their high temperatures which are because of the fact that they are very near to their stars. WASP-76b which was found in 2016, is said to be 640 light-years far from Earth. But, it is very close to its F-type star, which is a bit hotter than the sun, that the huge planet completes one rotation every 1.8 Earth days.

We will have a picture of the atmosphere of different planets as scientists go on exploring many exoplanets having different masses and temperatures, from those hot enough to rain iron to those with more temperate climates, from those bigger than Jupiter and to those which are not larger than the Earth.

The team had found a few spectral lines in observations of the exoplanet WASP-76b’s atmosphere, which was published in a journal. There was a meeting of the Astronomers on September 28 and presented on October 5 where they published it.

The study is part of the ExoGemS, or Exoplanets using the Gemini Spectroscopy survey, which is managed by Cornell University. This beginning brings together scientists who are interested in various atmospheres of exoplanets and also planets that are not in our solar system.

Researchers were able to measure the exoplanet’s brightness, temperature, size, shape, and orbital parameters from these observations, as well as some more information about the star which the planet goes around.

This spectral sighting of ionized calcium may show that the exoplanet has extremely powerful upper atmosphere winds. Or the exoplanet’s atmosphere temperature is much higher than we expected.

The normal temperature zone, located on the lower part of the planet between day and night, was studied by the researchers. We were able to separate the exoplanet’s signal from sunlight because the exoplanet travels quickly in its orbit. The calcium fingerprint on the spectra may be seen to be migrating rapidly with the planet.

The ExoGemS has been put up to investigate 30 or more planets. Astronomers are still looking for the mystery of exoplanets, which was just a dream twenty years ago. The study, as well as those of other researchers, is creating a way for future investigation into the atmospheres of other worlds outside our solar system.

Aside from most of the data supplied by this new research. This also means that CHEOPS is working as planned and also measuring brightness throughout deep space with accuracy.