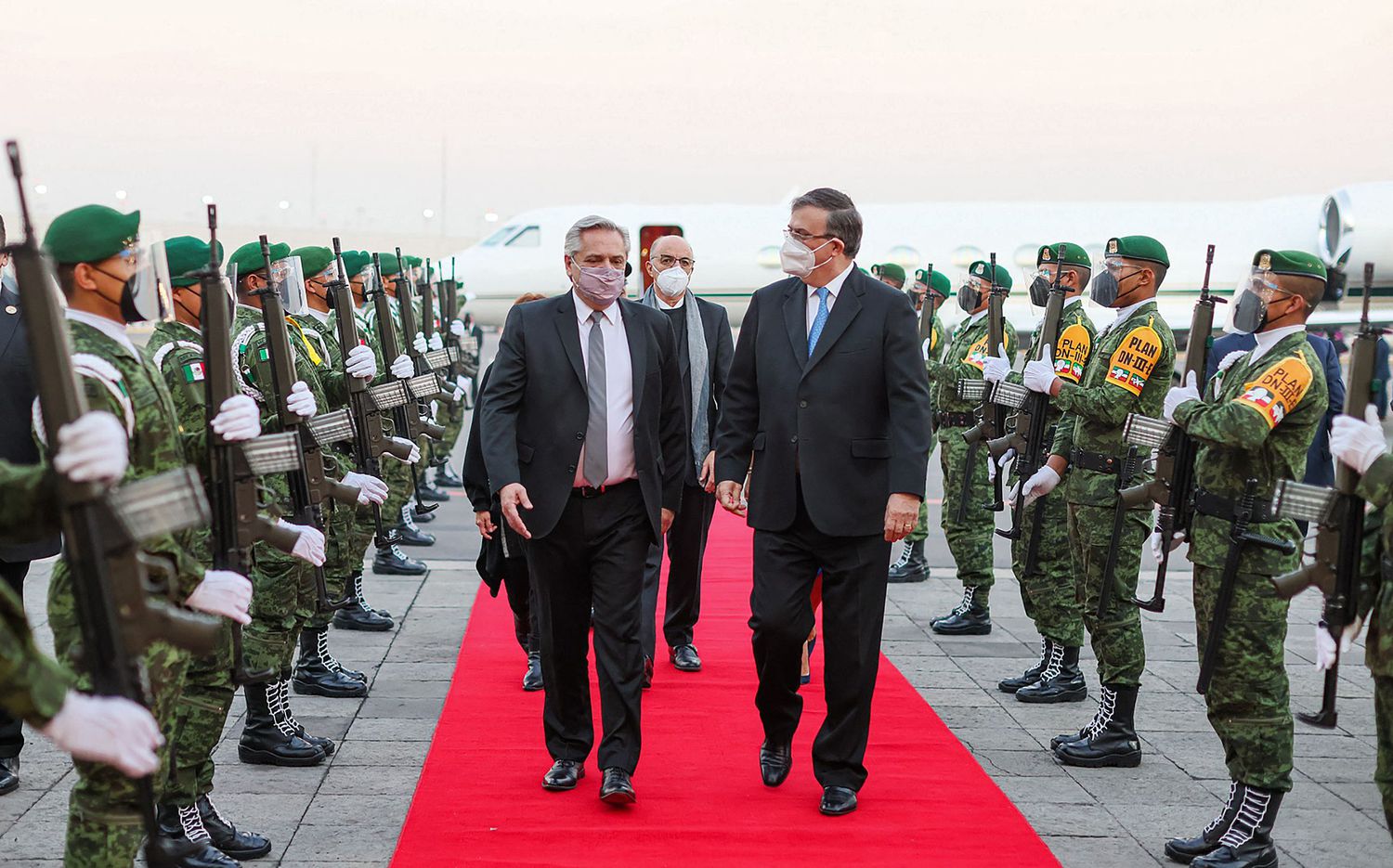 The Governments of Mexico and Argentina seek to strengthen their alliance with the axis in a diplomatic action focused on the management of vaccines against covid-19 .

Argentine President Alberto Fernández began a visit to Mexico this Monday in which he will discuss with his counterpart Andrés Manuel López Obrador a plan to strengthen collaboration to produce, package and distribute the doses of different pharmaceutical companies, as reported by the Mexican Foreign Ministry .

The trip takes place, however, in the midst of a scandal of vaccinations to influential people, uncovered last Friday in Buenos Aires, and with López Obrador turned in an attempt to lead the regional initiative in this phase of the fight against the pandemic.

The two presidents will hold a private meeting in which they plan to discuss some of the central issues on the bilateral, regional and multilateral agenda. The priority now is the strategy to distribute vaccines , not only in Mexico and Argentina but also in other countries in the region, and economic recovery.

The Government of López Obrador, which occupies a provisional position in the United Nations Security Council and holds the temporary presidency of the Community of Latin American and Caribbean States (CELAC), led a protest before the UN last weekby the “hoarding” of drugs by the most developed countries.

In this way, it seeks to gain international weight and for this it tries to strengthen the ties of its allies in Latin America. The affinity between political projects places Argentina as a preferred partner in this plan, although the fight against the coronavirus has been very uneven.

Faced with the good performance of the Fernández government, Mexico is one of the countries in which the highest number of deaths has been registered , with an excess of mortality that can reach 300,000 people and a fall in the Gross Domestic Product that last year reached the 8.5%.

With these premises, the visit will mark a milestone in the commercial and political relations between Argentina and the second Latin American power. But vaccines against the coronavirus also cast a shadow over the visit. The Argentine president is damaged by the “VIP vaccinations” scandal at the Ministry of Health. López Obrador seems interested in keeping his distance on this matter.

This week, the Mexican president wished a speedy recovery to his Secretary of Defense, Luis Sandoval González, infected with covid-19, and took the opportunity to launch a taunt perhaps referring to Peru that, seeing what happened in Buenos Aires during the last two days, I was hitting Alberto Fernández.

López Obrador said that the Secretary of Defense “was not vaccinated either in secret or in public, as in other countries, where even in secret those from above were vaccinated, they and their families.”

Argentine Health Minister Ginés González García had to resign on Friday for covertly vaccinating like-minded politicians, family and friends. Several beneficiaries of the “VIP vaccination”, such as Congressman Eduardo Valdés and Senator Jorge Taiana, were eliminated from the entourage that accompanied Fernández on his trip to Mexico.

For some reason, López Obrador resigned at the last minute to accompany Alberto Fernández on Monday’s visit to the Mexican laboratory Liomont, where the Oxford-AstraZeneca vaccine must be packaged, whose active ingredient is manufactured in Argentina by the mAbxience company, owned by businessman Hugo Sigman. The financing of the operation is in charge of a foundation of the magnate Carlos Slim.

Fernández, who was received by the Mexican Foreign Minister, Marcelo Ebrard, will tour the Liomont facilities alone. But on Tuesday he will participate together with the president of Mexico in one of his famous “mañaneras”, the long and almost daily press conferences with which López Obrador begins the day.

It is a show of cordiality that accentuates the will of both leaders to find a joint path to face the political and diplomatic challenges of Latin America (starting with the thorny Venezuelan issue and continuing with relations with the new United States administration) and to strengthen relations commercial.

Argentina needs investors. Alberto Fernández will try to convince a large group of Mexican businessmen that Argentina’s economy, very battered, can offer advantages. The meetings will be three, each one with a dozen businessmen so that the advisable distance can be maintained, and they will be held at the hotel where Fernández, the Intercontinental Presidente, is staying.

The Argentine president will also have dinner alone with Carlos Slim, the most important businessman in Mexico and one of the richest men in Latin America.

Fernández, who flew in a plane owned by Lionel Messi, already traveled to Mexico in November 2019 as president-elect, in his first international destination after winning the elections. However, this visit is the first by an Argentine president in office to the North American country.

The strengthening of this regional alliance also serves López Obrador to achieve a respite from a national agenda that does not give him truce. Tomorrow he will appear with his counterpart hours before the Chamber of Deputies debates a controversial reform of the electricity industry, which strengthens a State company, the Federal Electricity Commission, against private initiative.

The plan has been criticized by the private sector and the opposition and, according to several experts, poses a threat precisely to foreign investment.

The visit also takes place in a decisive week to define the most controversial candidacy for the midterm elections in June, which will renew the Congress and 15 of the 32 states of Mexico. López Obrador is being questioned, even in some sectors of his government and the party that supports him, Morena, for supporting the candidacy of a politician accused of rape, Félix Salgado Macedonio, to the Government of the State of Guerrero.

The president has rejected the accusations, which he describes as a “lynching campaign”, and has tried to reverse the criticism by charging against his adversaries and the press. Fernández’s visit now allows him, for a few days, to change the focus of the agenda.